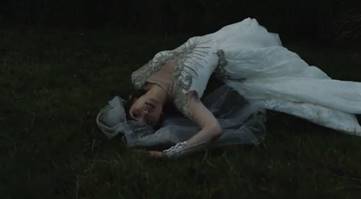 WATCH Thanks For The Dance

LISTEN TO Thanks For The Dance

[February 25, 2020] The title track from Leonard Cohen’s critically acclaimed posthumous release Thanks For The Dance, premiered on NOWNESS yesterday and VEVO today.

London-based photographer Harley Weir is the latest contemporary artist invited by NOWNESS to share her artistic interpretation of title track “Thanks For The Dance”. “I’m a huge fan of Leonard Cohen,” says Weir. “His lyrics are so raw and yet so warm. I am honoured to be a part of his legacy.” With her fresh and incomparable eye for the expressive and emotive, Weir’s images speak to the universal appeal and eternal quality of Leonard Cohen’s timelessly inspiring music.

Weir’s lyrical tapestry weaves together visual totems for birth, growth and death through which American actress Rowan Blanchard (Girl Meets World/The Goldbergs) plays a bride caught between the pain of transition and the promise of rebirth. Adding to the cast is British model, actor and entrepreneur Lily Cole, posed in the style of Botticelli’s Venus and surrounded by a trio of infants to conjure an image of love, fertility and new life.

Released last year, and nominated for a 2020 JUNO Award for ‘Adult Alternative Album of the Year’, Thanks For The Dance was an unexpected harvest of new songs from the master. Collaborating with producer Adam Cohen, friends and colleagues gathered to support and complete the work Leonard had begun, making an album that echoes the sounds of his catalogue, yet remains fresh, current and impactful.

“Thanks For The Dance” is the latest video in the series Thanks for the Dance: Artistic Responses to Leonard Cohen. Created by NOWNESS, the series offers a video representation of the album; an imagery interpretation of Cohen’s life and lyrics that is deeply personal to each filmmaker involved.