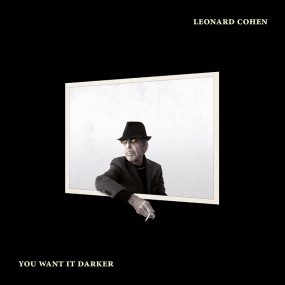 (August 12, 2016) Leonard Cohen, acclaimed composer of “Hallelujah”, at the age of 82, is releasing an album of haunting new songs, which the lucky few who have heard it, deem “a masterpiece” and “classic Cohen”. The album is called YOU WANT IT DARKER and arrives in stores this Fall.  As Leonard’s record company for over five decades, Sony Music is proud to be associated with this remarkable achievement.

LEONARD COHEN
YOU WANT IT DARKER
Produced by Adam Cohen

This great artist continues to astonish us. Uncompromising and urgent, YOU WANT IT DARKER is the latest chapter in Leonard’s significant contribution to contemporary music and thought. These startling songs have been beautifully realized in this his 14th and most compelling studio album, produced by his son, Adam Cohen.